Yesterday, the racing public’s attentions were turned to HQ, Newmarket, where there was group 1 action in the form of the Sun Chariot Stakes for fillies and mares over the mile (you may have caught Evie’s preview earlier this week). Most of the attention was on Persuasive, from the same trainer-jockey combination that brought you Enable; John Gosden and Frankie Dettori. However, these people forgot about little Roly Poly, the daughter of Misty For Me, trained by the record chasing Aidan O’Brien.

Roly Poly won gamely by a length, holding off the persistent challenge of Persuasive, to win her third group 1 in twelve weeks and give O’Brien a 23rd group 1 win this season, meaning that he is now just two away from matching the great Bobby Frankel’s record of 25 wins at the highest level in a single season. Surely it is only a matter of time until that record is broken with Champions Day coming up in just two weeks, Future Champions Weekend at Newmarket next week and the Breeders Cup meeting still to come. A mention should also go out to Jimmy Fortune who retired after finishing an honorable third aboard Nathra in the Sun Chariot Stakes after a stellar career which saw him win over 1,800 races and 16 group 1’s, including wins on great horses such as Lucarno, Oasis Dream and Dar Re Mi.

There was also action at Ascot yesterday which saw a successful return to the saddle for William Buick aboard Blue Point who won the Bengough Stakes. There was an upset in the Cumberland Lodge Stakes as Danehill Kodiac gamely beat odds on favourite and French challenger, Waldgeist by a head in a thrilling finish. The Challenge Cup, a heritage handicap, was won by the three year old, Accidental Agent for Charles Bishop.

Finally, there was also a wide range of top class International action, including an incredible 21st consecutive win for the wondermare Winx, a grade 1 win for Suedois at Keeneland and a win for Diversify in a wide open Jockey Club Gold Cup.

Next week sees Newmarket take centre stage yet again with the Fillies Mile and the Dewhurst Stakes in what looks set to be another fantastic weekend of racing – could we see Aidan O’Brien match Bobby Frankel’s record in less than a week’s time? 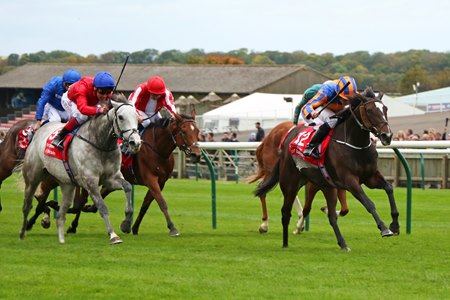