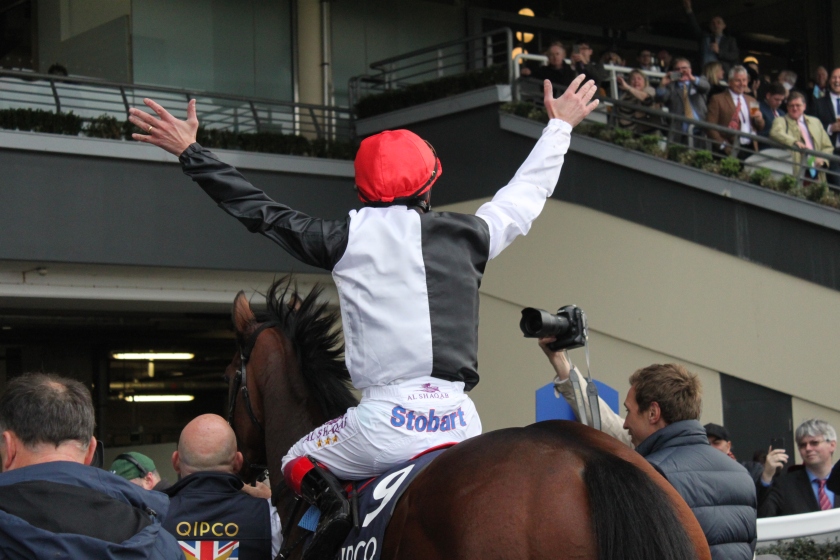 QIPCO British Champions Day at Ascot in October is always a spectacle to behold as the very best of British flat racing comes together to celebrate the achievements of the season just gone. It has seen the very best grace the Ascot turf: Muharaar, Almanzor, Minding, Solow and of course the legendary Frankel. This year was no different as spectators both at Ascot itself and at home were treated to an extravaganza of the very best flat racing you will see in a single afternoon. Even Storm Brian appeared to slow down in order to enjoy the action as the threat of heavy rain on the day didn’t arrive much to the relief of racegoers which meant that, whilst the ground was still soft and even heavy in places, it could have been a lot worse.

The afternoon began with the Champions Long Distance Cup which looked set to be round 2 in the rivalry between Order Of St George and Big Orange, with the former coming out on top in an epic duel in the Gold Cup at the same venue back in June. This time round, however, saw ground softer than ideal for Big Orange and there was serious doubt as to whether he would participate or not. His connections did allow him to run, but the fan favourite was unable to land a blow and ended up fading to beat only two home. Torcedor broke away from the field in the straight and looked to take a first Champions Day win for Jessica Harrington, but Order Of St George and Ryan Moore swept home late on to snatch the opening race by half a length in a thrilling finish with Stradivarius in third.

Next was the Champion Sprint Stakes which looked set to be a thrilling contest between the three year olds, Harry Angel and Caravaggio. However, Ascot specialist Librisa Breeze stole the show as he swept home to win his first group 1 win for Dean Ivory and Robert Winston from Tasleet in second and Caravaggio who stayed on for third and looks like he will benefit from a further trip. Librisa Breeze was proven to not be fussed by the testing conditions, but a horse who was not so certain to like these conditions was the Aidan O’Brien trained Hydrangea in the Fillies & Mares Stakes. Ballydoyle have been blessed with a number of ‘Iron horses’ over the years, most famously Giants Causeway and Found and Hydrangea looks to be the next in this line as she notched an impressive second victory at the highest level and if she stays in training next year should be a very nice prospect going forward. In winning this race, Hydrangea allowed Aidan O’Brien to remarkably match Bobby Frankel’s record of 25 group 1 wins in a single season, and it looks likely that he will beat that record by this time next week.

The next race was the Queen Elizabeth II Stakes and the spotlight fell on the milers: namely three horses who come from very different profiles, Churchill the horse on the redemption course, Ribchester the class act, and Beat The Bank the improver. A horse that fell under the radar was the John Gosden trained Persuasive, who had been placed in two group 1s this season alone. With just two furlongs to go, the race looked as if it had been set up perfectly for a tussle between Ribchester and Churchill, but a masterclass ride from Frankie Dettori saw Persuasive swoop down the outside and determinedly throw down her challenge to notch a first group 1 victory in impressive fashion in what was her final start. Ribchester was second and Churchill finished third.

Then came the spectacle, the one everyone had been waiting for: The Champion Stakes. The role of honour for this particular race is truly star studded (Cirrus des Aigles, Frankel, Farrh, Noble Mission, Fascinating Rock and Almanzor) in recent years alone and another stellar line up this year meant that the prestige of the role of honour looked set to be maintained. The son of Frankel, Cracksman, was out to win his first group 1 and was the favourite to do so although a step down in trip meant that many were not convinced that he would do that. He well and truly proved the doubters wrong. The early pace was set by Success Days and the globetrotting Highland Reel who both raced wide, with Ryan Moore taking a Willie Carson-esque route on the latter and hunting out better ground on the outside of the track (Highland Reel would then finish a highly admirable third and looks all set to retain his Breeders Cup Turf crown next month). However, turning for home it was only a one horse race as Cracksman hit the front and flew away impressively to win by a remarkable seven lengths and award his sire a first European group 1 in a race that he won five years previously.

A fantastic day of racing, setting up a number of exciting clashes for next season none more so than Enable vs Cracksman which will truly be a race to savour. Jumps fans don’t have long to wait now though until the National Hunt season gets into full swing again as the flat season rounds up next week at Doncaster with the Racing Post Trophy for two year olds which could see Aidan O’Brien break Bobby Frankel’s longstanding record.