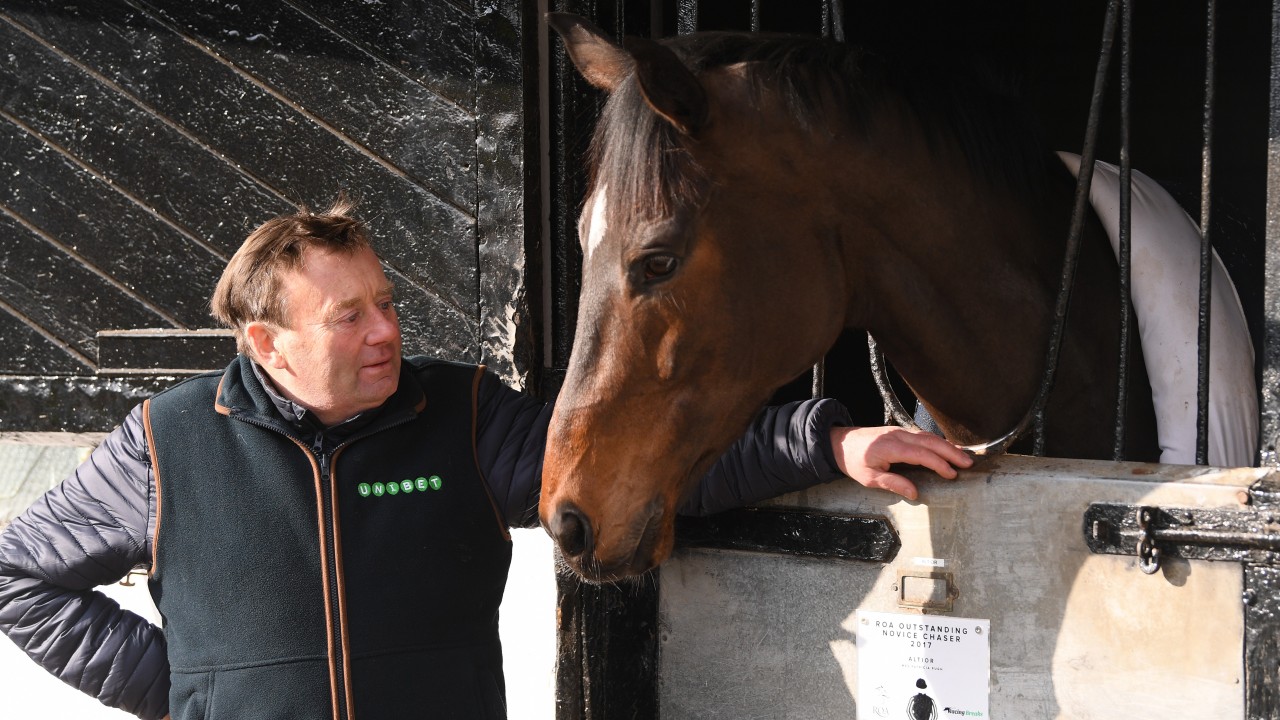 The Cheltenham Festival ‘trial race season’ has begun with Supasundae beating Faugheen in Ireland and Buveur D’Air sauntering home in the Listed Race, Contenders Hurdle on February 3rd. This Saturday brings a whole new feeling of excitement with the mouth-watering clash between Nicky Henderson’s star, Altior and Paul Nicholls’ lovable grey, Politologue. Both horses are key contenders in the market for the Champion Chase in March. Altior is currently 5/4F (William Hill) for the show stopping spectacle and Politologue is the 7/2 (William Hill) 2nd favourite.

At Newbury, on Saturday, a very new task is being proposed to both horses. The 2 mile, pure speed based, race will be run on ground a lot softer than good. Henderson’s 8 year old is 11 from 11 in all his hurdles and chase races but has not run this season so far due to a wind operation. Altior is expected to once again win the Betfair Exchange Chase but Nicky was truthful and open about his chances this weekend.

He said: “They are as good as they are going to be in March, but I’ve got to be realistic about this- I’d like to get a race into him and if he gets beaten, he gets beaten.”

Henderson admitted that he would have liked another week to get some of the freshness that Altior had so fantastically expressed at home, out of him but he was also keen to express that “He’s in excellent shape”. Realistically, if Altior brings his best to Newbury on Saturday, he’ll be hard to beat but that doesn’t mean Team Paul Nicholls with Politologue won’t try.

Politologue, the beautiful grey 7 year old, is 3 from 3 this season already, his wins including the imperious Tingle Creek at Sandown. His owner, John Hales, is very keen to oppose Altior as he believes “It will be a good contest and that’s what it’s all about.” Despite being rated 5 lbs inferior to Altior, Politologue is reported as being “very well in himself” by his regular jockey Sam Twiston-Davies. The Nicholls camp are bullish about their horse’s chances on Saturday and are sure he will put up a fight and Altior will not get it all his own way, like Nicky Henderson predicted.

Another horse that won’t make it an easy race for either of the two horses previously mentioned is Fox Norton. His last run in the King George at Christmas time is easily forgotten as this horse’s best distance is 2 miles- 2m 4f. Fox Norton was ½ a length 2nd to Politologue in the Tingle Creek and before that had been an 8 length winner of the Shloer Chase in November. He is a very talented horse in his own right and actually came very close to being the Champion Chase winner last season, a head away to be exact. His trainer, Colin Tizzard is keen to get this run into him before March where he goes for the big money once again.

Saturday’s clash will provide some serious pointers towards the Champion Chase at the Cheltenham Festival in March. Altior and Politologue will both be pushed, arguably, harder than they’ve gone before.