A whole year of training comes down to these next four days. Races will be won; races will be lost. People will come out happy; others sad. Punters, giddy with excitement, await the first day of the festival and what a blinder it looks to be.

Twenty runners will go to post in this years’ renewal, including unbeaten Getabird and Grade Three Betfair Hurdle winner Kalashnikov. The latter has won three out of his four starts and he was second on his other start behind Summerville Boy in the Tolworth. Kalashnikov won’t mind the large field or the ground as there was twenty four runners and it was soft ground in the Betfair Hurdle. GETABIRD has won both of his hurdle starts, one of which being a Grade Two. The ever-softening ground will not be a problem for the Willie Mullins-trained gelding as he has won on heavy ground previously. Summerville Boy won a flat race at Killarney before moving to Tom George and kicking off the season with two seconds and a third before winning the Grade One Tolworth by four lengths. Another that will relish conditions is First Flow. Kim Bailey’s charge didn’t really take to bumpers and he was forth on both occasions. He has won his first three hurdle starts by a combined thirty four lengths, one of which, similar to Getabird, a Grade Two. He could be the each way value in the race at about 10/1. Like Getabird, Sharjah comes from Willie Mullins’ stable. He won his maiden and then went on to win a novice hurdle at Gowran Park. Next time out, he contested a Grade one but crashed out whilst in the lead at the last. In that race, Mengli Khan ran out of the second last. Gordon Elliot’s horse won the Grade One Royal Bond Hurdle before running out and then finished second behind Getabird by nine lengths in the Grade Two Moscow Flyer.

Only five go to post this year and the line up is a classy one. FOOTPAD will no doubt go off favourite after being extremely impressive on all three of his runs this season. He won his beginners chase by eleven lengths and then Willie Mullins sent the son of Creachadoir to the Racing Post Novices Chase, a Grade One, where he once again won by eleven lengths under a still Paul Townend. Then, the Simon Munir and Isaac Suede- owned gelding bolted up in the Irish Arkle beating Petit Mouchior. The latter beat Footpad quite a few times over hurdles last season but wasn’t up to Footpad’s standards last time out. His jumping was quite haphazard which could be his downfall. Saint Calvados is the main English hope. Unbeaten over chase fences, he began his career with two runs over hurdles in France before coming to Harry Whittington’s yard. He was successful on English debut at Newbury and won the Grade Two Kingmaker at Warwick last time out. His jumping is excellent and could go close. Nicky Henderson has Brain Power in this. The son of Kalanisi’s form figures read 1UF for this season. He won a novice chase by twenty eight lengths on debut this season before failing to finish with a jockey on board in both starts in Grade One company. Robinshill is the outsider of the field who may find this a bit too much. 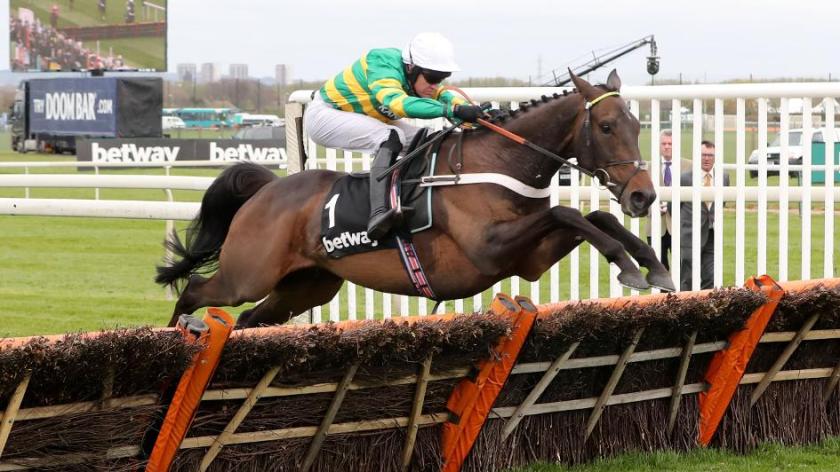 There will be twelve runners who line up this year for Tuesday’s showpiece. BUVEUR D’AIR has completely dominated a quite pathetic two mile hurdling division this season. He won this last year and has won a Listed race as well as two Grade Ones. In 2015, Faugheen won this race. This season ‘The machine’ hasn’t been at his best. At the beginning of the season, he won the Morgiana Hurdle but then was surprisingly pulled up at the end of 2017. He came back at the start of February and was a gallant second to Supasundae. Cheek pieces could ignite the flame of the old Faugheen and he could give Buveur D’Air a run for his money. Elgin was supplemented for this race at a cost of £20,000 by connections, after a decisive win in the Grade Two Kingwell Hurdle. Old warrior My Tent Or Yours won the International Hurdle in December and it would be a fairytale victory for the fan’s favourite if he could go past the post in front.

APPLE’S JADE won this last year and could easily do it again. She is unbeaten on all three starts this season, winning a Grade Two and two Grade Ones. She beat the boys well in the Christmas Hurdle and looks the one too beat. Her main English challenger is La Bague Au Roi. Warren Greatrex’s mare has won all three of her starts this season, two Listed races and a Grade Two. She beat Jer’s Girl and Midnight Tour in November and can definitely be in the frame. Jer’s Girl, a two time Grade One winner, was two lengths behind Apple’s Jade this season. Benie Des Dieux is from Willie Mullins’ yard and she has only raced over chase fences in Willie’s care. Her French hurdling form isn’t in any way up close to the aforementioned mares in this race.

Jury Duty was third in the Pertemps last year and he has won a Grade Two this season and was just denied at the highest level last time out. Stablemate Mossback will be partnered by Lisa O’Neil who won this last year. The son of Yeats was second in a Grade two last time out over three miles. Questions about the trip for this horse though. No Comment was third in his only start this season behind promising Terrefort and Cyrname. Similarly, the trip looks an unknown. MS PARFOIS is receiving 7lbs and that could be critical to the outcome of this race. Antony Honeyball’s mare has been a model of consistency all season winning thre of her five starts. She will love the ground and has beaten the boys before. On her penultimate start, she had Duel At Dawn in second. Rathvinden was only beaten a few lengths in December in a Grade One but would have to put in a clear run to figure. Sizing Tennessee was second around here in a Grade Two at the beginning of the year and could figure.

Nineteen will go to post in this year’s renewal. De Plotting Shed could go off favourite for Gordon Elliot. He has been reasonably consistent this season with a few seconds on heavy ground this term. Livelovelaugh comes from Elliot’s main rival’s stable. The Willie Mulllins- trained gelding has won one of his three starts this season and was third on the other two occasions. Any Second Now is a maiden over chase fences and has been beaten by Monalee, Footpad and Invitation Only this season. Barney Dwan and Mister Whitaker look the best of the English horses. The former has won his past two starts over fences and will like the soft ground. Last year, he was second in the Pertemps. The latter, MISTER WHITAKER, won at Cheltenham on soft last time out and has been very consistent this season. He has won over course and distance on two separate occasions and could figure. Rocklander looks to have each way value at a huge price as he has been a model of consistency this year all bar a disappointing effort in the Pertemps last season. He has taken well to chasing and won by a whopping fifty three lengths on chasing debut.