Sixties Icon, Milan, Shantou, Nijinsky. Four horses who’ve managed to get their head over the line first in the oldest and longest classic. Milan and Shantou both have become top class national hunt sires, siring the likes of Jezki and Death Duty. Some very classy individuals have placed in this race like Camelot, when he was attempting to win the Triple Crown, and Stradivarius and Crystal Ocean last year. Twelve horses will line up to try and be the 242nd winner of the final classic of the season.

This race was established in 1776 and is the oldest and longest of Britain’s Classics. The event was devised by Anthony St Leger, who the race is named after. The original distance was two miles but it was changed to the current distance of one mile six furlongs and one hundred and ninety three yards in 1813. In 1906, it was declared that geldings were no longer allowed to run in it.

John Scott has held the record for most wins as a trainer (fifteen) for one hundred and fifty six years and it doesn’t look like it will be beaten anytime soon. The fastest time ever recorded in winning the race was 3m00.44s by Masked Marvel for William Buick and John Gosden. Gosden has Lah Ti Dar in the line up this year and her price has shortened dramatically since it was declared that she was running. She is the likely favourite at the off.

This horse is very consistent at the top level without winning. He is yet to win as a three year old but won twice at two aver a mile. The reason why he hasn’t won recently is probably that he simply hasn’t has his ideal ground. He loves to get his toe in and will relish the conditions in this. He was second in the Derby and was well fancied to come good in the Irish equivalent but failed to do so. He was beaten by Old Persian and The Pentagon in that race. Since then, he was third behind Kew Gardens in a group one and second in the Gordon Stakes behind Cross Counter, who was beaten by Old Persian in the Great Voltigeur. His form with lots of his competition doesn’t give him the best chance but he’s sure to show his true ability on this ground.

This horse is one of the leading contenders for this race in the race and one of five for Aidan O’Brien. He absolutely bolted up over one mile six at Royal Ascot in the Queens Vase beating Southern France and Nelson by just over five and a half lengths. He won a Group One over one mile three at Longchamp in July ahead of Dee Ex Bee and Nelson and then was third to Old Persian in the Great Voltigeur with The Pentagon, Nelson and Zabriskie behind them. He is a winner on soft in the past and his stamina won’t be an issue.

He is fairly lightly raced as he has had just the six career starts. On his second outing, he was seventh in the Racing Post Trophy and The Pentagon finishes third that day. He won on his three year old debut beating Raymond Tusk three lengths. He’s been kept in good company since as he was a two length second behind Wells Farhh Go in the Bahrain Trophy and has won a listed race and a Group Two on his last two starts. If will be his first try at this trip but he will handle conditions and the track.

The first thing to mention about this horse is that he’ll definitely handle conditions as he has won two group threes on similar going at Leopardstown. He is a half brother to US Army Ranger, who also has an entry for the Melbourne Cup like this horse, so they must think Nelson will stay despite being left one-paced by Kew Gardens in the Queens Vase and ended up well beaten by his stablemate. If ridden more conservatively, 66/1 maybe a bit of a ridiculous price. 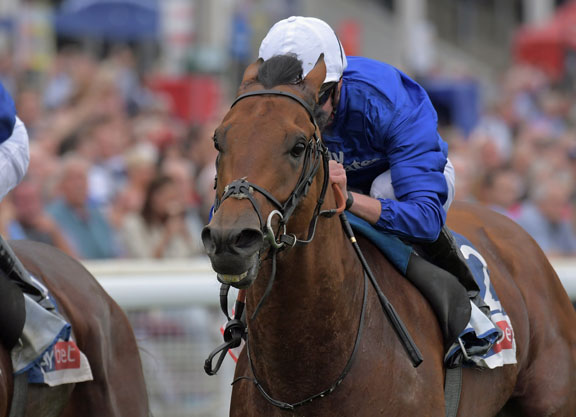 This trainer/jockey combination has already won a classic this season with Masar and have a good chance of another with this lad. I’ve fancied him for a while for this race after his King Edward VII win. He has won six of his ten starts and four of those have came this season. The first was by winning a handicap and then was a decent second to his stablemate Key Victory in a Listed race at Newmarket. After that, he won the Fairway Stakes and the King Edward VII at Royal Ascot. He was then sixth of twelve in the Irish Derby when stepped up to one mile four. That causes uncertainties about his stamina and the only hint of stamina in his pedigree seems to be his dam’s full sister who stayed one mile four well. Based on his Great Voltigeur win, he has the beating of Kew Gardens, The Pentagon, Nelson and Zabriskie.

Definitely isn’t one of the leading fancied runners. He’s yet to try this trip but he did bolt up by eleven lengths at Haydock in April over one mile three furlongs so he could possibly stay. He’ll like conditions but this grade looks too hard for him.

A winner on debut then second in a novice race behind Loxley, it was a surprise to see him entered in the Eclipse. He was sixth of seven but not disgraced at all. Next time out, he won a Listed race at Hamilton and then was a staying on second over one mile five furlongs in the Geoffrey Freer. He’ll stay and won’t mind the good to soft ground. It would be great if he could win for his owners.

Second over one mile six furlongs behind Kew Gardens and ahead of Nelson a neck behind, he has since been fourth in the Irish St Leger Trial beating Thomas Hobson, who won the Doncaster Cup. He kept on but never got to the leaders so it seems like he’ll stay a lot further than this. He won’t like the ground if it’s soft.

No9- The Pentagon
Galileo x Vadawina

This horse’s only wins have come over seven furlongs and one was in a group three. He has ran in the English and Irish Derbies and the Great Voltigeur, finishing behind Old Persian and Kew Gardens, this season. Connections obviously think he’ll stay as he has entries for two mile races in the future. He probably won’t like the soft ground and could be the pacemaker for Ballydoyle.

His only win has come over seven furlongs. He was last in the Derby and eighth of nine in the Great Voltigeur, at the time of writing this, he was about 125/1 and that looks an appropriate price.

This filly has captured lots of people’s imaginations after winning all three of her starts by a combined nineteen and three quarter lengths. It was touch-and-go whether she’d run in this and connections obviously think she’ll stay or she’d be running in the Arc instead. The way she won over one mile three suggests she will stay but she is untried at the highest level so she could just be a decent horse running against average Listed performers and that’s why she’s is winning so convincingly. She is very well related being by Lah Ti Dar and a sibling of So Mi Dar and classy two year old Too Darn Hot, who runs in the race before this and is rated 1lbs higher than her in official ratings.

No12- Maid Up
Mastercraftsman x Complexion

It took her five attempts to win her maiden and she did so nicely at Doncaster in June. She’s ever so progressive and in four runs, she’s gone from a mark of 69 to 105. She has been on a role since her maiden victory and has gone through the grades until she was beaten a short head on her penultimate start in the Lillie Langtry. She then came out and won very nicely over a mile and six at Goodwood so she’ll most definitely stay. The third horse had previously ran Southern France to two and a half lengths at Leopardstown but she beat him three and a half going away. Andrew Balding’s horses are flying at the minute so she’s a very good each way contender.

The main five trends of winners in recent years have been…
– 8/10 recorded a top three finish last time out.
– 10/10 ran in a group three or better last time out.
– 7/10 have been outside the top three in the betting
– 9/10 ran between three to five times that season.
– 10/16 we’re making their debuts over the trip.

When narrowing the field down by these criteria, you are left with Loxley and Raymond Tusk. The favourite, Lah Ti Dar, would be out at the second as she is yet to tackle a group race.

My antepost fancy for this race for a long time has been Old Persian. There are stamina doubts but King Edward VII win was very good and I don’t think he has had the credit he deserves in the media recently as all the talk seems to be about Lah Ti Dar and Kew Gardens. It was possible that Kew Gardens wasn’t meant to have a hard race there but Ryan did ride him out and wasn’t getting any closer. We must remember that he beat Kew Gardens in the Great Voltigeur last time out by one and a half lengths and Lah Ti Dar is yet to tackle a group race. She has a very good record and all her victories have been very convincing but lots of the key trends of the last few years go against her. This race will find out the true extent of her ability as she goes up against group winners. The other filly, Maid Up, could be a grand each way bet as she will stay and never runs a bad race. It would be great for young jockey Rob Hornby, who takes the ride, if she can go close and maybe win. The Aidan O’Brien battalion won’t make it easy for the English runners.

To Win- Old Persian
Each Way- Maid Up