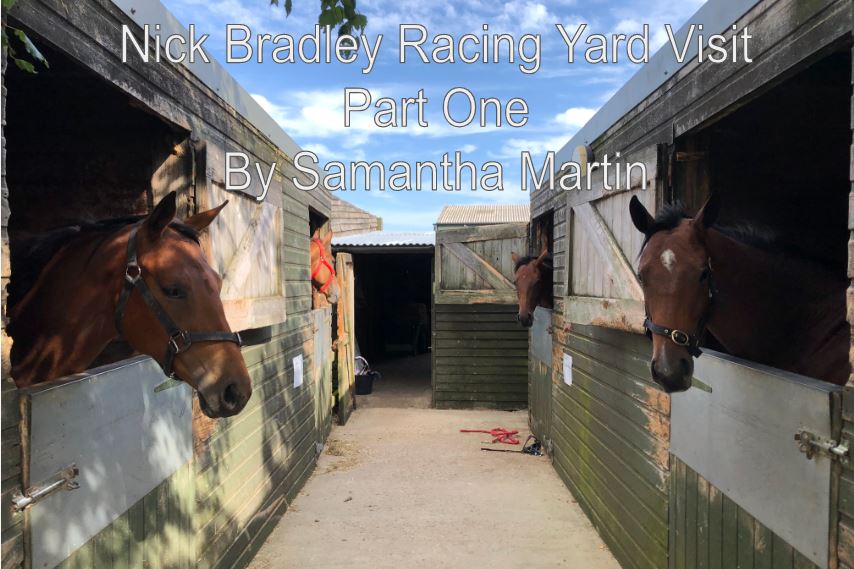 On Sunday, I had the pleasure of visiting Nick Bradley’s farm in North Lincolnshire for their open day. Over the past five years, Nick Bradley Racing has become one of the leading syndicates in the UK with only Godolphin having a better record with two-year-olds this season.

It was an early start for us from our Leicestershire home and, when we arrived at the yard, we were greeted as if they had known us for years. There were sausage cobs (which were delicious), bacon cobs, hot drinks, chocolates and more for us to enjoy!

The yard itself is an ex-haulers yard, which Nick purchased about ten years ago, and they have a total of one hundred acres spread about the picturesque village of Goxhill. There is a barn and individual other stables as well as a lunge pen and horse walker. Within the one hundred acres, there is plenty grazing space for their broodmares and foals.

Nick’s background is in professional gambling and he was originally a teacher until he began earning more money from gambling than teaching! So, he decided to take everything he’d learned from gambling into purchasing racehorses. Before he started Nick Bradley Racing, one of the first notable horses he bought was Exceptional Art, the Beverley Bullet winner, who later sold for £180,000. In addition, he purchased globetrotting group one-winner Suedois; Sprint Cup winner G Force and British Champion Stakes winner Donjuan Triumphant, who now stands as a stallion in France. There is a nice story with this horse: he had splints (bony growths) on his legs at the sales, which meant that nobody wanted him and, despite this, he went on to win a group one!

Five years ago, in 2015, Nick created ‘Nick Bradley Racing’. This is a syndicate where new owners can buy a 1%/2.5%/5% share in horses with a buy-in fee and monthly payments (some don’t though). Nick is known as being one of the shrewdest buyers of racehorses and extensively examines possible purchases to best suit the syndicate. The aim is to have the highest percentage chance of winning as possible. He invests his own money into the initial purchases and often keeps a percentage share in the horses he buys. In their first year, they had ten two-year-old fillies and they had a group three and listed winner. In the second year, Commissioned won on his first start for Nick Bradley Racing 19 in none other than the Queen Alexandra Stakes at Royal Ascot!

This year, they have had seventeen two-year-old fillies and ten individual winners. The two of their most notable horses this season have been Dandalla and Fev Rover. Dandalla started out her career on the second day of the delayed new season with a brilliant win by two lengths. Next stop for her was the group three Albany Stakes at Royal Ascot, which she won by a huge six lengths. In early July, she ran in the Duchess Of Cambridge on the July Course at Newmarket and the race couldn’t have gone much better for Nick Bradley Racing as she fought out the finish with ‘Nick Bradley Racing 43 & Partner’s’ Fev Rover. Just a neck split them with Dandalla Prevailing. Previously, Fev Rover had been second to smart colt Method on debut. She learnt a lot from her tussle with Dandalla and cosily landed a listed race at Sandown next time out. She went to France on 22nd August and won the group two Shadwell Prix du Calvados in taking style. I found it very interesting that they said “when” Fev Rover wins the Prix de Marcell-Bousac – not if! These two fillies have such big futures and I’m really excited to see them run through the rest of the season.

Up until the backend of August, ‘Nick Bradley Racing’ was the leading owners for two-year-olds until Godolphin overtook and it is Nick’s aim to be ahead of Godolphin next season and have a whole team of top class, black type performing fillies. I’m really excited to see these fillies hit the track next season as they are a brilliant bunch of horses. Part Two of this article airs Friday 17th at 5pm and that will be introducing you to them! (So, in short, an article full of cute horse pictures!) They are focusing on fillies for a multitude of reasons. Nowadays people generally want colts, which make fillies cheaper at the sales. Overall, it is easier to get black type with fillies as there are less runners in races. This means that they have more value to sell-on as broodmares or for further racing after their two-year-old campaign. The Great British Bonus is a useful, new scheme to boost prizemoney and, in some cases, a filly can get £25,000 extra for winning one of the eligible races.

The new yearling fillies were paraded for us and I learnt so much from listening to Nick talk about them and why he bought them. If you would like to watch the parade, visit this link https://nickbradleyracing.co.uk/open-days.

Prizemoney has been a huge talking point of late. I spoke to Russell Kennedy, Nick’s Racing Operations and Marketing Manager, at length on Sunday about how this ‘issue’ effects their syndicate, he said, “The majority of our owners aren’t interested in the prizemoney. What they want is a runner and to be part of being an owner. They want a winner. They want to go racing. They want to watch their horse run. They want information on what’s happening with the horse.” Another issue should be highlighted more in Russell’s opinion is to do with racecourses, “The big issue for our owners, and I think the bit that has been forgotten about when the press have been talking about these millionaires who are worried about losing a few quid, is the owner experience. People want to have a really good experience when they go racing. They want badges. They want that ‘raceday experience’ that some courses do better than others. Some courses treat you, as they should do, like a VIP, you get really well looked after. There’s great facilities, the best view on track and it’s easy to navigate around – you can go to the preparade ring, parade ring and you get a great view in the grandstand. Some courses are absolutely awful. You literally get put into a portacabin and you’re forgotten about. You might get a cup of tea or a biscuit that’s it. […] If you want to get people interested as owners, and retain owners, I would say don’t put another £500 or £1000 on the prizemoney put that into giving owners the most amazing experience that you can. That’s how you’ll retain owners.”

A wonderful part of my visit was getting to chat to some of the owners about their experiences with ‘Nick Bradley Racing’ and their horses. Nick took a group down to see their foals and I went with another group and Nick’s wife to see the broodmares. A new, one-off syndicate is a breeding syndicate. This involves one of Nick’s mares, who has been put in foal to Arc winner Waldgeist as part of his first book of mares. The owners involved, who were lovely and great to speak to, said that they were given an insight like no other. The bloodstock world can sometimes seem closed off to us regular people so I think something that ‘Nick Bradley Racing’ does well is open up that industry to its owners. For the Goffs Premier Yearling Sale, quite a few owners went and saw the bidding and the horses before the sale.

A stereotype about racehorse owners is that they’re upper class and elite but all of the owners at the open day were just regular people with a passion for the sport! The overall emotion was how much they loved being a part of their horses’ journey on the racetrack. Something that a few people mentioned that they appreciated most was the level of transparency and honesty from Nick and Russell. With the updates and yard visits, they were made to feel like they mattered, which some other syndicates lack. During lockdown when their horses were racing, they had video calls over Zoom to watch the horses and, leading up to the sales, Nick talked everyone through how he was going to approach the various sales. Everything I heard was completely positive and everyone seemed to have a lovely time.

One of the great qualities of horse racing is the whole ‘community’ of fans and, for me, the open day at Glebe Farm completely encapsulated that. Huge thank you to Russell, Nick and family for the invitation and their kindness!

Keep your eyes out on @reinitinracing’s Twitter around 5pm tomorrow (Friday 18th September) (as long as technology is on my side) for Part Two, where I introduce you all to the yearlings!

Keep your eyes out on @reinitinracing’s Twitter around 5pm tomorrow (Friday 18th September) for Part Two, where I introduce you all to the yearlings!