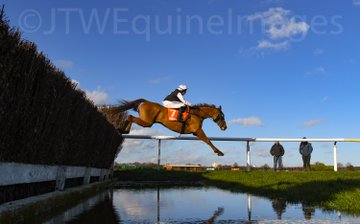 Classic Chase Day at Warwick is one of my favourite racedays of the year. There is always a great atmosphere and brilliant racing. There are plenty of good races on the card this year, which is excellent but disappointing as it would be so much better to be there than at home watching from the sofa. I’m going to preview the McCoy Contractors Civil Engineering Classic Handicap Chase, a grade three over three miles and five furlongs. McCoy Contractors are a good supporter of the game and their horse, Here Comes McCoy, (who is in my 20 To Watch) won the last race on the card twelve months ago.

Three of the thirteen runners set to line up this year were in the race last year: Captain Chaos came second; Petite Power was third and Le Breuil was fifth. All three horses have less weight to carry this time around with Ballyoptic at the top of the weights with the 11st12 burden due to his mark of 160. Jordan Nailor claims 7lbs, which is helpful and he’s a good jockey, but it is still a tough task. He’s an extremely classy horse and won the 2019 Charlie Hall Chase. Also, in that season, he won a really competitive Ascot handicap off top weight but returned to action out-paced and pulled up behind Cyrname in this season’s Charlie Hall. He was dropped 2lbs for finishing tenth in the Ladbrokes Trophy, when his stablemate The Hollow Ginge was fourth. I think it is going to be a tough ask for Ballyoptic but hopefully the handicapper will be kind for next time out by dropping him in the handicap a bit.

Nigel Twiston-Davies won this in 2005 with Baron Windrush and his second runner in the race is The Hollow Ginge. I was really impressed with him in the Ladbrokes Trophy. He is only a young horse and ran a really good race, staying on towards the end, only beaten fourteen lengths by three smart horses. That sensational run has been sandwiched between two unseats – at Kelso when he didn’t get past the first and, seven days ago, when he unseated Jamie Bargary in the Welsh Grand National. Last January, he won on soft/heavy ground at Leicester so he won’t mind too much if the rain falls. My only concern would be how Warwick’s back straight is such a jumping test that, if he makes an error, there isn’t much time to recollect his thoughts between obstacles. Sam Twiston-Davies takes the ride and he took top honours in this race back in 2015 for his old boss Paul Nicholls.

In last year’s race, Captain Chaos made the majority of the running before being headed by Kimberlite Candy. As the picture above shows, he had a healthy advantage for a lot of the way. Next time, he won by fifty-four lengths at Doncaster, making all. He had blinkers on that day and was left alone at the front. He received an 8lbs rise for that but pulled up off his new mark on two occasions at the beginning of the season, one of those in behind Notachance. Last time, he was eleventh at Newbury. They have taken the blinkers off him for the past three starts and he is only 2lbs higher than the Doncaster procession. He has strong claims, proven over track and trip.

Petite Power really impressed me last year even though he was beaten seventeen and a half lengths to be third. Next time out, he pulled up in the Midlands’ National and returned in the autumn finishing last at Sedgefield. Next time, he was beaten twenty-two lengths by Storm Control in a good race at Cheltenham. Last time, he was well-beaten over three miles six at Exeter but these below-par performances have given him a mark 9lbs lower than the one he had this time last year. He is 18lbs out of the handicap, including Liam Harrison’s claim and you can’t ignore him off that kind of weight. Storm Control only carries 8lbs more despite being rated 20lbs higher than Petite Power. He started the season with a good third in October and has then won his next two starts at Cheltenham in tough, hard-fought style. He steps up three furlongs in trip but he is a highly progressive eight-year-old.

On the other end of the spectrum, there are quite a few eleven-year-olds in this renewal – Achille, Walk In The Mill, Late Romantic, Ballyoptic and Red Infantry. Five horses of that age have won since 1989. Walk In The Mill is best known for finishing fourth in the 2019 Grand National and won the Becher Chase in the same year. He was gearing up for another tilt at the National last year but obviously it never happened. He returned in a race over three miles at Ascot but they went too quick for him that day. He had an uncharacteristic fall at Aintree in the Becher Chase last time but he will definitely have enough stamina for this race. They have put blinkers on him, probably with the hope that they will give him some enthusiasm over these regular fences.

Late Romantic goes for Oliver Greenall and I’d like to see him run well. This son of Mahler won at Kelso on heavy ground in February by twenty-six lengths but pulled up on seasonal reappearance at Carlisle. Next time, he won nicely at Haydock, beating The Dutchman by a neck. The form has worked out and the fact that was on heavy ground over three miles and a furlong suggests he’ll stay. Warwick will be a stiff test for him.

Achille and Red Infantry are coming off 400+ day absences. Achille represents Venetia Williams, who won this in 2013, and this grey son of Dom Alco was last seen only getting beaten three lengths by West Approach in a grade three at Cheltenham last November. In the previous season, he won three races and the latter of those came after he pulled up at Taunton due to an irregular heartbeat. Venetia Williams also has Didero Vallis. This horse hasn’t won since December 2018 on soft ground at Haydock. In December 2019, he was second in the Rowland Meyrick and that has been his best performance since. He has returned to his last winning mark, which is useful. Red Infantry has been off the track for three weeks longer than Achille after finishing fifth to The Conditional at Cheltenham. Before that, he was seventh in the Scottish Grand National so he has the stamina for this but he wouldn’t want the ground to be too testing.

Django Django has the aid of cheekpieces this time after he was beaten thirty-nine lengths at Newbury at the end of December. He hasn’t won since this time last year when he beat Notachance by four and three quarter lengths off equal weights. Whilst Django Django hasn’t graced similar heights since, Notachance won impressively at Bangor over three miles. Captain Chaos and Django Django both pulled up. This horse is only seven and comes from the yard that won this in 2008 and 2011. He’s the youngest runner in the field and is open to improvement.

Last to mention is Le Breuil, who is a bit frustrating. This horse, ridden by Kielan Woods, would be so well-suited to a Grand National yet he hasn’t gained a handicap mark high enough to get into the race. As of 11th February 2020, the first stage entries for the Grand National, bottom weight (number 40) was off a mark of 151. (Admittedly, the race did contain Delta Work, Tiger Roll, Bristol De Mai and Native River, who were 169+ rated). Le Breuil is currently rated 140, which is far from ideal. He won the National Hunt Chase in 2019 over just short of four miles so his stamina isn’t in doubt. Since the Cheltenham Festival win, his handicap mark has taken a nose-dive – he was even dropped 1lbs for a third in the Becher Chase, when beaten nearly twenty-nine lengths. He ran prominently and made a horrible error at the Canal Turn and didn’t really recover. Interestingly, he has had a wind operation after that race. To get a run in the Grand National, he needs to win this by a good margin.

I’m going to side with LE BREUIL. I was impressed with the way he ran last time and, if that was with a respiratory problem, it is even more impressive. He ran well in this last year and Kielan Woods is my jockey to follow for the season. I slightly prefer him to The Hollow Ginge because I’m wary that the jumping test down the back straight might catch him out. Late Romantic should run well too and it is interesting that Captain Chaos has blinkers back on and could be difficult to peg back if given an easy lead.